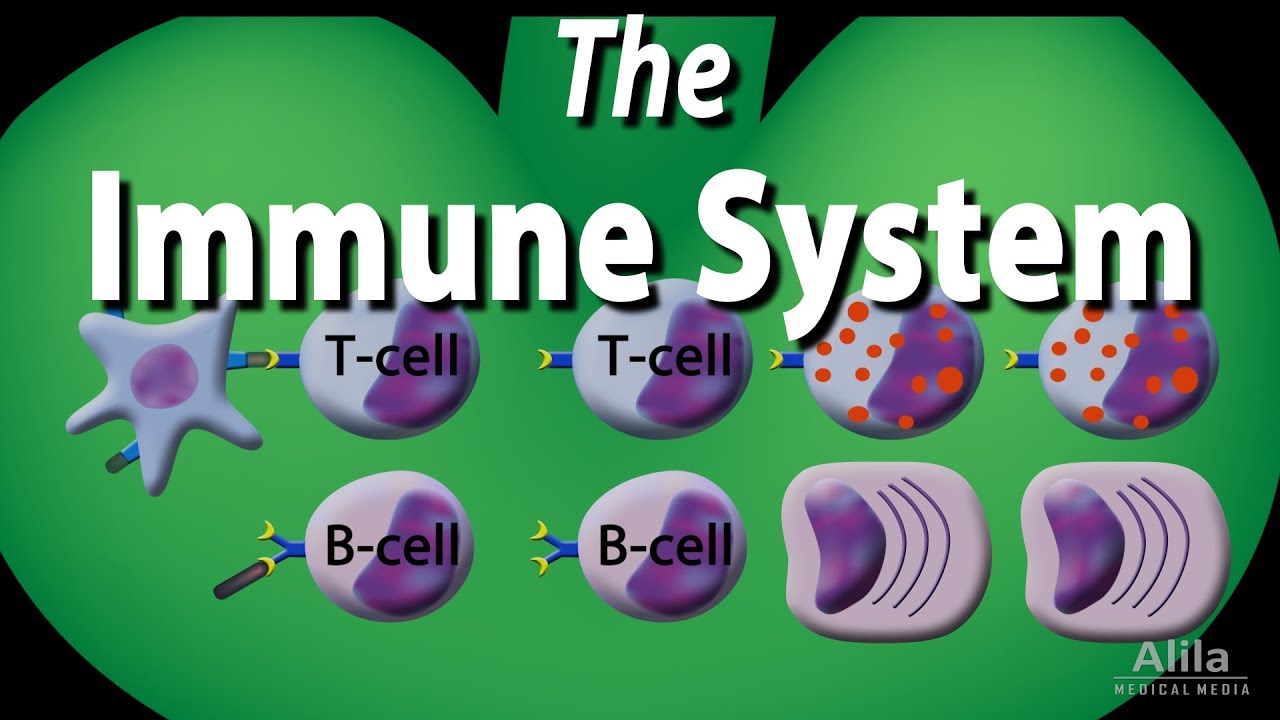 What happens during an infection? Surface barriers, innate and adaptive immune response. This video and similar images/videos are available for instant download licensing here https://www.alilamedicalmedia.com/-/galleries/images-videos-by-medical-specialties/allergy-immunology
Voice by: Ashley Fleming
©Alila Medical Media. All rights reserved.
Support us on Patreon and get FREE downloads and other great rewards: patreon.com/AlilaMedicalMedia
All images/videos by Alila Medical Media are for information purposes ONLY and are NOT intended to replace professional medical advice, diagnosis or treatment. Always seek the advice of a qualified healthcare provider with any questions you may have regarding a medical condition.
The immune system is the body’s defense system. It protects the body from disease-causing organisms, called pathogens. Surface barriers: physical, chemical, and biological obstacles. The primary physical barrier is the skin. Body systems that are open to outside environment, such as the respiratory, digestive, urinary and reproductive system, each have their own mechanisms to prevent entrance of microbes: mucous membranes trap them, sneezing or coughing reflex expels them, while urine mechanically flushes them out. Chemical barriers include stomach acid and various antimicrobial substances in sweat, saliva, tears. The body’s normal flora competes with pathogens for nutrition and space, providing biological barriers.
If an organism manages to get past the surface barriers, it will meet with the innate component of the immune system, which mounts an immediate, but non-specific response. If this fails to contain the infection, another layer of defense, called the adaptive, or acquired, immune response comes into play. The adaptive response takes longer to be activated, but is more effective as it specifically targets the invading pathogen. It also leaves the body with a “memory” of the pathogen, so it can react faster the next time the same pathogen attacks.
The major players of the immune system are the white blood cells, or leukocytes. All leukocytes derive from hematopoietic stem cells in the bone marrow. Each of them has different roles in the immune response.
The first response of the innate immune system is inflammation. Resident macrophages, which constantly patrol body tissues, ingest the pathogen and release inflammatory chemicals, called cytokines, which attract other immune cells to the site of injury. Basophils, eosinophils and mast cells release their own cytokines, amplifying inflammation. Cytokines dilate blood vessels, increasing blood flow and are responsible for clinical signs of inflammation such as redness and swelling. They act on endothelial cells of blood vessels and serve as chemical cues for migration of neutrophils – the major phagocytes involved in first-line defense. Activated endothelial cells attach to neutrophils in the flow, slowing them down, before getting them to squeeze through the vessel wall. Neutrophils engulf bacteria and destroy them with enzymes or toxic peroxides. They may also release highly reactive oxygen species in a phenomenon known as oxidative burst, which kills pathogens faster and more efficiently. The neutrophils themselves, however, also die in the process, their debris forming pus on the injury site.
The adaptive immune response starts with the so-called “antigen-presenting cells”, of which dendritic cells are most effective. Resident dendritic cells on the site of infection swallow up pathogens, cut them into pieces, called antigens, and display them on their surface. These dendritic cells are then picked up by lymphatic capillaries and travel to lymph nodes, where they present the antigens to a matching T-cell. The pathogen itself may also travel to a lymph node where it may encounter a matching B-cell. The match-finding process underlies the specificity of adaptive immune response. T-cells and B-cells exist in billions of variations, each carries a unique surface protein, which acts like a key. Among these billions of keys, only the ones that can bind to, or unlock, the invading pathogen, are activated. Activated T-cells and B-cells undergo differentiation and proliferation, called clonal expansion. This process produces memory cells, ready for future infections by the same pathogen; and effector cells, which include activated cytotoxic T-cells and plasma B cells producing antibodies; both of these are specific to the pathogen. Antibodies and cytotoxic T-cells then leave the lymph node for the bloodstream to be delivered to the site of infection. Antibodies attach to pathogens and either target them for destruction or neutralize them. Cytotoxic T-cells release toxins to kill infected host cells.