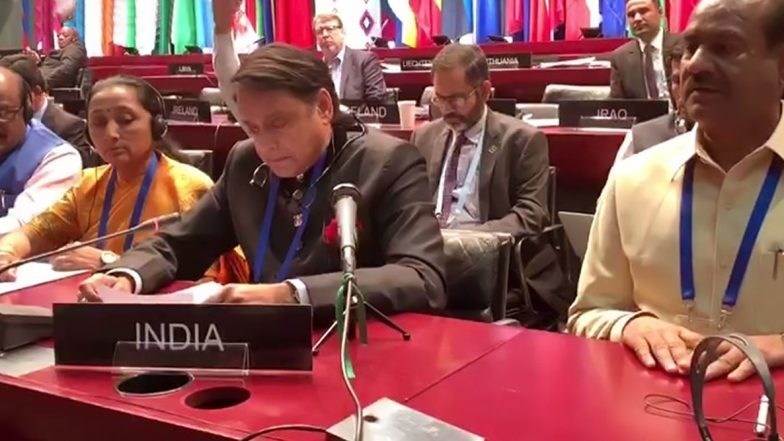 Belgrade, October 16: Congress MP Shashi Tharoor on Wednesday hit out at Pakistan at 141st Assembly of Inter-Parliamentary Union (IPU) in Belgrade, Serbia. Reacting to Pakistan’s allegation of human rights violation in Kashmir, Tharoor warned the neighbouring country to refrain from interfering in the internal matters of India. Lok Sabha speaker Om Birla was also present at the event. Shashi Tharoor on J&K Issue Says ‘India Can’t Talk to Pakistan If They Have Guns in One Hand And Bombs in the Other’.

The Congress MP said, “Pakistan has raised an issue internal to India. Indian delegation rejects outright and strongly condemns such references…Don’t need interference from across the border.” He further added, “It is ironic that Pakistan responsible for inflicting countless cross border terrorist attacks on J&K is trying to masquerade as a champion of international law.”

#WATCH Congress MP Shashi Tharoor slams Pakistan at 141st Assembly of Inter Parliamentary Union, in Belgrade, says, “…It is ironic that the state(Pak) responsible for inflicting countless cross border terrorist attacks on J&K is trying to masquerade as a champion of int’l law.” pic.twitter.com/igqO8KVejk

On Sunday also, Tharoor slammed Pakistan at the Asian Parliamentary Assembly which was held on the sidelines of the Inter-Parliamentary Union annual meet. He had said that Islamabad is was attempting to politicise the internal matter of India at the international forum. Shashi Tharoor Backs Narendra Modi Government, Says ‘Impossible’ That PM Narendra Modi Would Have Asked Donald Trump to Mediate in Kashmir Issue.

On Tuesday, Birla highlighted India’s growth story and its achievements with respect to various crucial economic indicators, while speaking at the summit. The Lok Sabha speaker participated in the ‘Speaker’s Dialogue on Governance’, a high-level IPU platform to exchange political ideas. The Indian parliamentary delegation led by Birla is in Belgrade to attend the 141st assembly of the IPU. The summit is taking place from October 13 to October 17.