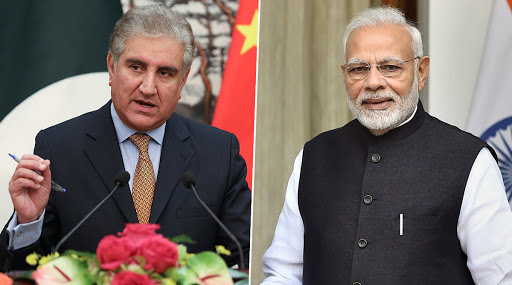 Islamabad, September 18: Pakistan Foreign Minister Shah Mehmood Qureshi on Wednesday has put down India’s formal request to allow the use of its air space for Prime Minister Narendra Modi’s flight to the United States. This new development comes hours after India requested to Pakistan days ahead of ‘Howdy Modi’ event in Houston in Texas of United States of America on September 22. India Seeks Pakistan’s Permission to Use Its Air Space For PM Narendra Modi’s Flight to US.

Confirming the decision of Pakistan, Qureshi said, as quoted by news agency ANI, “We have conveyed to the Indian High Commission that we will not allow the use of our air space for Prime Minister Narendra Modi’s flight.” This is the second time in a month that Pakistan has denied permission for an Indian flight to use its airspace. Earlier, it denied permission for President Ram Nath Kovind’s flight.

The new decision by Pakistan comes amid the escalating tensions between the two countries post the abrogation of Article 370 from Jammu and Kashmir on August 5, 2019. Following the abrogation of special provisions from Jammu and Kashmir and the debates at the international forum, relations between the neighbouring countries deteriorated further. Pakistan Denies Airspace Permit to Indian President Ram Nath Kovind, Cites New Delhi’s ‘Behaviour’ in Kashmir.

With a series of airspace ban from last February — post-Balakot Airstrike in Pakistan-Occupied Kashmir, tensions escalated in the South Asia region. However, the relations further deteriorated after Article 370 abrogation from Kashmir and imposition of restrictions by the Narendra Modi government.

Adding more fuel to the ongoing tensions, was a slew of controversial comments from political leaders of both sides. One of the Pakistan ministers even hinted of possible war. The ceasefire violations across the Line-of-Control in Kashmir have made the dialogue between India and Pakistan even more difficult. Now, with Pakistan latest move — denying permission for PM Narendra Modi’s flight top pass through their airspace — situation might deteriorate in coming times.