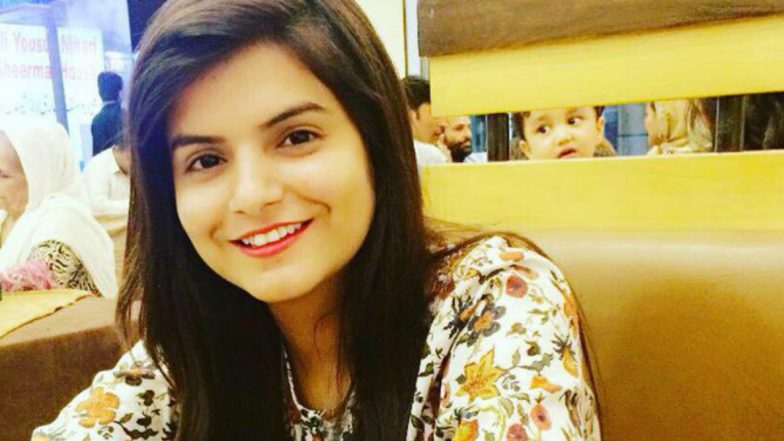 Karachi, September 17: A Pakistani Hindu dental college student was found dead in mysterious circumstances in her hostel room in Sindh province with a rope tied to her neck, prompting her family to demand a transparent probe, according to media reports on Tuesday.

Namrita Chandni, a final-year student of Bibi Asifa Dental College in Larkana district and a social activist, was found lying on a cot by her friends on Monday with a rope tied to her neck. Her room locked from inside, The Express Tribune reported. Shoaib Akhtar Join Online Campaign to Demands Justice for Nimrita Kumari.

Chandni belonged to Ghotki, the district which was in the news since Sunday after three cases against 218 rioters were filed for vandalising properties, including a Hindu temple.

Widespread protests erupted in Ghotki on Sunday after an FIR was filed against the principal of Sindh Public School on the complaint of a student’s father who claimed that the teacher had committed blasphemy by his anti-Islam remarks.

Chandni’s friends grew worried when she did not respond to their knocks on the door for several minutes.

“She was neither responding to the knocking at the door nor to our shouts,” one of her friends told the police.

The hostel’s watchman later broke open the door and found her dead, the report said. Police is yet to ascertain whether the girl committed suicide or was murdered.

Chandni was laid to rest in her hometown in Ghotki on Tuesday. The Hindu community in Mirpur Mathelo shut down their businesses and shops to mourn her death and register their protest. Social media users also demanded an investigation into her death, Dawn newspaper reported.

Chandni’s brother Dr Vishal, a medical consultant in Dow Medical College in Karachi, told the media that the marks around her neck suggested that she had not committed suicide.

The marks on her neck looked like those made by cable wires, while the wounds on her arms suggested that someone was holding her down, he was quoted as saying by Dawn newspaper.

Talking to DawnNewsTV, Nimrita’s uncle said that they wanted an investigation into why her body was kept in the Chandka Medical College’s intensive care unit before the family reached the hospital. He accused the doctors of being involved in the “murder” and questioned why a post-mortem examination had not been conducted.

A first information report (FIR) of the incident is yet to be registered. Chandni’s family said they will lodge a complaint with the police once they receive a post-mortem examination report. Police have yet to issue a statement.

Activist Kakoo Ram repeated the allegations of the deceased’s uncle and said that Chandni was a social activist. He demanded that the Larkana administration look into the matter.

The College’s Vice Chancellor Aneela Attaur Rehman said the incident appeared to be one of suicide but the police and the medical team will be able to ascertain the actual cause of death after the postmortem.

She said that SSP Larkana was investigating the mysterious incident and police had sealed the room, The News reported. She said that the mobile phone and other belongings of the deceased student, along with other evidence, were taken into custody by police for forensic analysis.

Sindh Chief Minister Syed Murad Ali Shah has ordered secretary universities and the board to furnish details of the incident and provide all kind of help to the parents of the girl, the report said.

Previous Revamped government loan scheme appeals to cash-strapped retirees
Next Date, significance and everything to know about the day