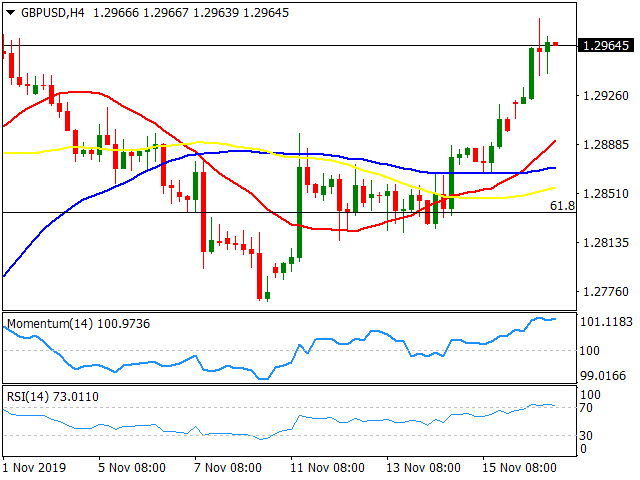 The British pound strengthened on Monday and reached a four-week high versus the US dollar as recent polls suggested Prime Minister Boris Johnson’s Conservative Party extended its lead in UK general election campaign.

According to the BBC’s general election poll tracker, the average of polls shows the Conservative Party surpassing 40%, the highest level since the election was announced. That is 12 percentage points ahead of the main opposition party, the Labour Party, led by Jeremy Corbyn.

On Monday, the UK Prime Minister said he would abandon his plan to cut corporate taxes and instead would use the funds – around £6 billion – in public services, including the National Health Service, weighing slightly on the Cable.

Even though GBP/USD retreated slightly from its four-week high of 1.2985 and currently trades around 1.2965, the technical picture remains bullish in the 4-hour chart, with indicators in positive territory while the 20 and 100-period SMA have made a bullish cross. However, the RSI has reached overbought levels, suggesting the pair might take a breather before resuming the upward move.

Perspective also remains constructive in the daily chart, with October’s high at 1.3012 as major resistance level to overcome, followed by a less significant level at 1.3040, and then the 100-week SMA at 1.3060.

What’s behind Liz Warren’s humiliating retreat on ‘Medicare for All’?