by Sarah Winterburn
in Sports
0

When Carlo Ancelotti was named Everton manager at the end of December, the presumption was that he must have been promised funds for new players or surely he would not have taken the job.

Arriving just before the opening of the January transfer window, Ancelotti said he would get the collection of festive fixtures out of the way before looking through the window himself; but weeks later, new players are yet to be sighted.

Instead, the Italian has persevered with what he inherited, emphasising his faith in the current group whenever asked about potential incomings, which happens quite regularly at this time of year.

He’s been able to improve the current bunch of players, or at least the way they function as a unit, by having a clearly defined tactical plan and a couple of set formations, one for attack and another for defence.

The reason they have been able to adopt this style so quickly is partly because they were already doing something similar under caretaker manager Duncan Ferguson, and also because the two shapes are fairly easy to understand as each player has a defined role.

Defensively it’s a simple 4-4-2, but as shown below players have a license to step out of the line to press the ball if they see an opportunity to win it back. 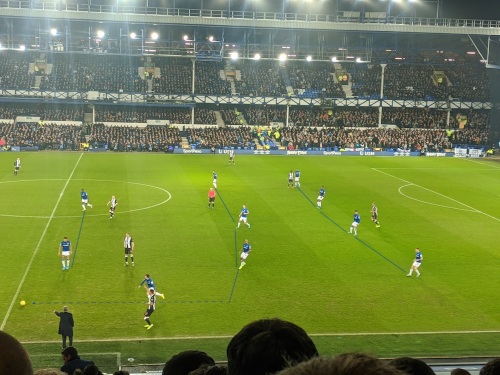 In this example, the left winger Bernard broke out of the middle four and won the ball, before launching a dangerous attack.

The rest of the defensive shape needs no further explanation and is similar to the one used by Ferguson during his spell in charge – just a little more compact – and the players move around the pitch as a tighter unit. When the team are attacking the shape is more flexible, but there are still some basic instructions for players to follow in order to create a path to goal.

Ancelotti has spoken of the need for his players to make more vertical passes in order to find the best route forward. To begin to understand this we can turn to the man himself to explain a problem he believes his side had following their recent draw at West Ham.

“At this moment we are not playing vertically, we are playing a lot of balls back instead of playing forward which is an area we can improve,” Ancelotti said this week.

There is the aim. Possession with purpose, and in order to execute this effectively players move out of their 4-4-2 formation.

Bernard instigates this by dropping inside from the left wing, giving Lucas Digne an area to move into from left-back. This leaves a space in defence which could potentially be dangerous should Everton lose the ball, so left centre-back Mason Holgate shifts across slightly to cover Digne.

The right-centre back – in this case, Yerry Mina – can then cover the centre of the field, or a midfielder can drop deeper, and there can often be a large gap between the two centre-backs during the build-up phase.

Right-back Djibril Sidibe holds his position in defence, occasionally bombing forward but not as regularly as Digne on the opposite side.

The average positions of the Everton players against Newcastle show the insurance offered by the two midfielders, 8 and 18, once the full-backs move forward. 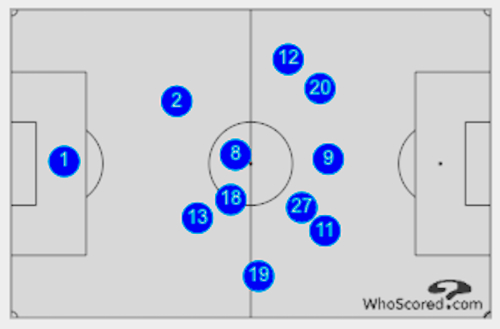 The midfield pair switch roles depending on where space emerges, and if one drops back the other will provide an option through the middle to link with Bernard (20), who by now will be somewhere near the inside left channel or acting as a No.10.

One of the two strikers might drop deep while the other plays off the back of the defence, and the right winger, Theo Walcott (11) here, holds the width on that side unless the full-back sees the opportunity to overlap.

A picture usually speaks a thousand words, but the image below represents the 215 written above explaining this attacking shape. Bernard and Walcott are circled in attack to the left of the image, and Fabian Delph is circled between the defence on the right, having dropped in between the centre-backs from midfield. 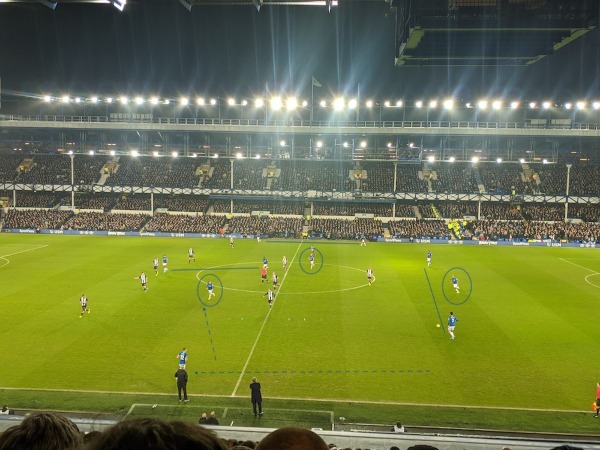 The players who linked up for Everton’s opening goal against Newcastle, Bernard and Moise Kean, stand out as two Ancelotti can build his team around, but behind them everyone else is also working from the same page.

‘Working’ being the operative word. As Kean, who is increasingly becoming a fans’ favourite, exited the pitch to a standing ovation on the 71st minute, he had the look of a player who’d put in a serious shift.

This is another of the clear and obvious improvements at Everton since Ancelotti took over, and his compatriot epitomised this along with the rest of Everton’s front four who ran and ran, on and off the ball.

Come the end of the game one familiar problem arose — that of Everton’s difficulties defending set-pieces. It was an issue under Marco Silva, and it was an issue again here.

With the height and aerial prowess of Mina at the back, Everton should be a team adept at dealing with corners and free-kicks, but the Colombian appears to be the only one who stands up in these moments, and he can’t do it all himself.

Questions will be asked of goalkeeper Jordan Pickford on both goals after he failed to convince when the cross came in ahead of the first, and was actually stood behind his goal line as he saved Florian Lejeune’s shot which resulted in the equaliser.

As much as Pickford looked to be a really promising goalkeeper during his time at Sunderland and in England’s youth teams, he has not improved after swapping Wearside for Merseyside despite becoming the No.1 in England’s senior side during this time.

It’s harsh to put the blame for both goals at his door, but had he been more commanding in dealing with the first situation, and not stood behind the line for the second, Everton would have come away with the win they deserved.

What happened at the end of this Newcastle game shouldn’t take away from the previous 90 minutes. Holgate and Mina are a promising central defensive partnership, Bernard is zippy and creative, Dominic Calvert-Lewin is adding goals to a solid all-round game, and Digne is showing signs he can return to top form – and once there he’s among the best left-backs in the league.

Gaps in the squad can be filled and improvements can be made in a number of positions, but for now, Everton are working hard, all on the same page, have a clear plan, and seem a lot more motivated. This is already a step in the right direction under Ancelotti.