EUR/USD: Trade Tensions And Political Developments In Italy Are Eyed

by Yohay Elam
in forex news
0

Markets have finally found some calm in this vacation month of August – but it may be only temporary. The mood is more tranquil after China has fixed its yuan at a stronger rate than expected – showing that it is willing to show restraint in its response to the new tariffs announced by US President Donald Trump.

While the People’s Bank of China (PBOC) has set USD/CNY above the round number of 7:00, it was far from the significant devaluation seen on Monday – a move that sparked a sell-off in stocks and a rush to safe-haven assets.

Charles Evans, President of the Chicago branch of the Federal Reserve, has said that the Fed may respond to growing uncertainty by cutting interest rates. Evans is known as a dove – supporting looser monetary policy – so his words have failed to provide surprises. Nevertheless, they show that the central bank may act.

The positive change is reflected in rising stocks and higher bond yields. The sharp fall in returns on government debt has been signaling an upcoming recession and worrying investors. At least for now, a sense of normality has returned.

Can it last? Concerns about global trade may return once US and Chinese officials comment on the sensitive topics of trade, the currency, and technology. Huawei – the Chinese technology giant – may suffer new sanctions from the US.

Moving to the old continent, the absence of any meaningful economic release may contribute to some stability. However, political developments in Italy may weigh on the euro.

Matteo Salvini, Italy’s interior minister and considered de-facto leader, is considering breaking up the coalition government with the 5-Star Movement. The two parties have been clashing on several issues, including the budget.

The specter of fresh elections in the euro zone’s third-largest economy – triggering another potential confrontation with the EU over the budget – may push the common currency lower.

Brussels and Rome have previously been at loggerheads around Italy’s budget deficit and if Salvini may fire up the rhetoric ahead of elections – potentially coming in the autumn. 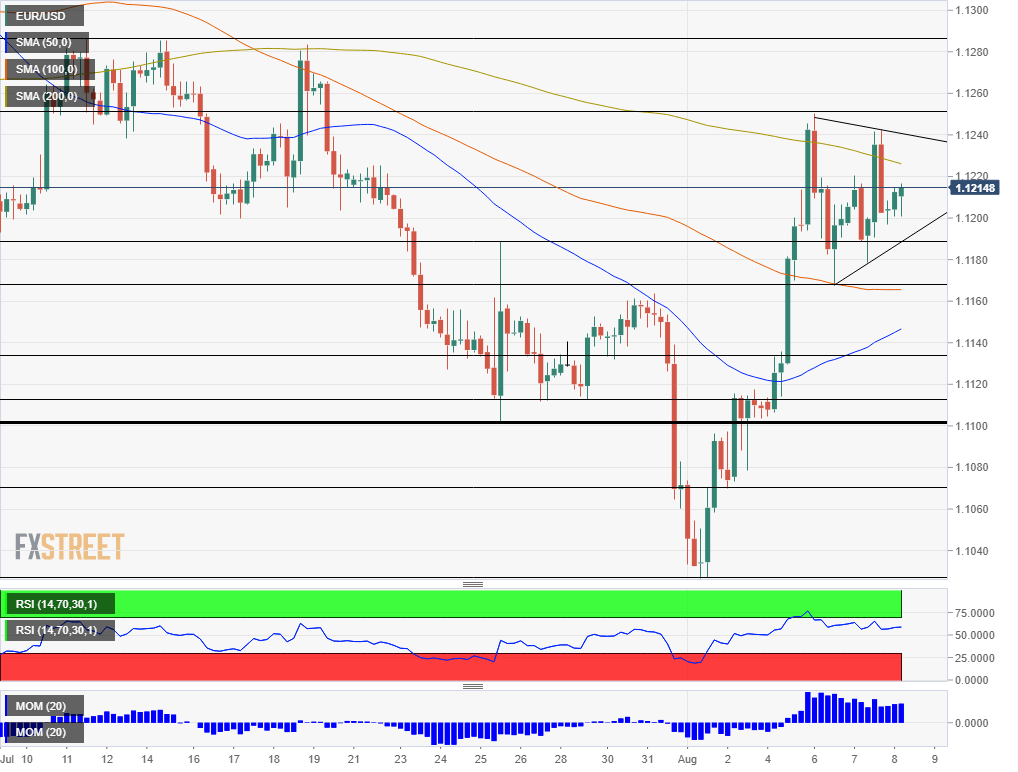 EUR/USD has been trading in a narrowing wedge with lower highs and higher lows. Technical analysis textbooks suggest that the pair will eventually pick a direction and make a significant move.

To what direction? The upside may be more appealing as momentum on the four-hour chart remains to the upside and EUR/USD trades above the 50 and 100 Simple Moving Averages.

Initial resistance awaits at the downtrend resistance line which stands at around 1.1235 at the time of writing. The next level to watch is the weekly high of 1.1250, followed by the triple-top of 1.1285 that was seen in mid-July.