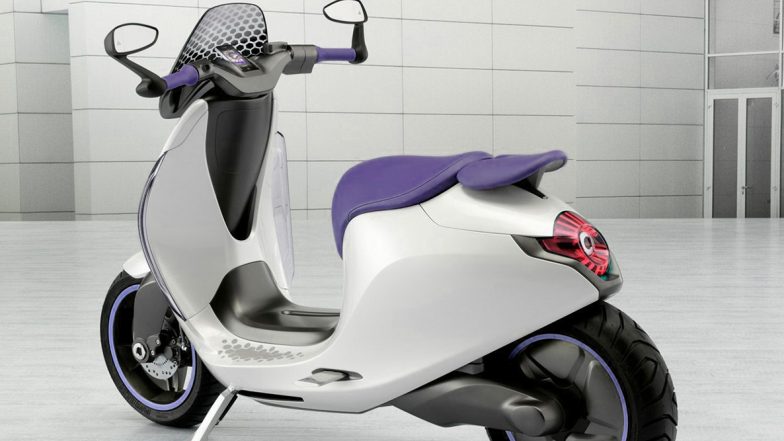 Bajaj Auto, the Chakan-based two-wheeler manufacturer, will be officially unveiling its new electric mobility brand – Urbanite in the country today. The company will be launching a new electric scooter under the brand, which is likely to be called as Chetak or Urbanite. The new Urbanite or Chetak will be the first E-Scooter from the brand. Bajaj reportedly registered the name ‘Chetak Chic’ for its electric scooter hinting that the manufacturer is eyeing to bank on the popularity of the classic India scooter, Bajaj Chetak. Bajaj Urbanite Electric Scooter Likely To Be Launched in India on October 16; Could This Be The New Bajaj Chetak?

If the marker rumours are to be believed, the Urbanite brand is expected to be an all-new division under Bajaj Auto. The brand will mark Bajaj’s reentry into the scooter space almost after two decades. And, Bajaj Chetak reportedly seems to be carrying a strong calling with the brand across the country.

We have already seen the electric scooter doing rounds on the Indian roads several times. As per the silhouette of the test mules, the electric scooter from Bajaj is likely to carry a retro design with a round-shaped headlamp, curved panel, single-side suspension setup, alloy wheels and much more.

The upcoming electric scooter under the Urbanite brand is expected to gain a premium position in the domestic market, as in when it arrives. The electric scooter from Bajaj will be pitted against the likes Okinawa Scooters, Hero Electric, Ather Energy, Ampere Electric Vehicles, Twenty Two Motors and other two-wheeler electric scooter makers.

As far as the pricing is concerned, it is rumoured that Bajaj will be looking to price the Urbanite e-scooter about the price bracket of 1 lakh. If launched at the said pricing, the electric scooter will undercut the Ather 450 that currently retails at Rs 1.08 lakhs (ex-showroom).