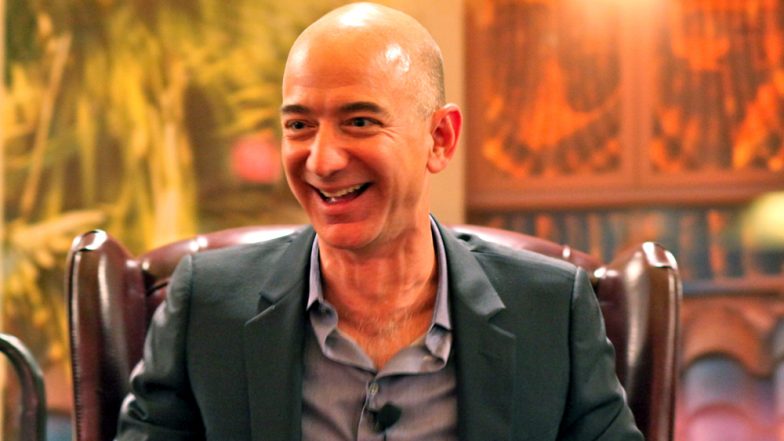 Washington, September 19: Amazon chief Jeff Bezos pledged Thursday the US corporate giant will become carbon neutral by 2040 and would encourage other firms to do the same, in a bid to help meet the goals of the Paris climate accord 10 years early. “We want to use our scope and our scale to lead the way,” Bezos — the world’s richest man — told a news conference in the US capital. Amazon Opens Largest Campus in Hyderabad, E-Commerce Giant to Expand Business in India.

Amazon announced its “Climate Pledge” initiative and said it would be its first signatory as part of an effort to reduce emissions in line with a 2050 goal for carbon neutrality set by the Paris agreement. As part of the ramped-up pledge, Bezos said Amazon had agreed to purchase 100,000 electric delivery vans from vehicle maker Rivian, to help cut its carbon footprint.

The first will hit the road in 2021, with the fleet to be fully operational in 2030. Amazon also pledged to invest $100 million on reforestation efforts in cooperation with the Nature Conservancy. Bezos’s announcement came the day before a global day of demonstrations to demand action on climate change, ahead of a UN summit on zero emissions on September 23. Amazon Food Delivery App To Take on Zomato, Swiggy With Lucrative Commissions to Lure Restaurants.

Amazon faces mounting pressure to address its environmental impact, with more than 1,000 of its workers planning to walk off the job Friday as part of the Global Climate Strike.